The traditional house of ancient and medieval Japan (1185-1606) is one of the most distinctive contributions that country has made to world architecture. While the rich and powerful lived in castles and estates, and the poor in humble country houses or crowded suburban neighborhoods, large numbers of middle-class Japanese lived in what became the quintessential Japanese home. Among the features that remain popular today are rice paper walls, sliding doors and screens, as well as tatami-covered floors, sofa beds and a minimalist approach to décor. 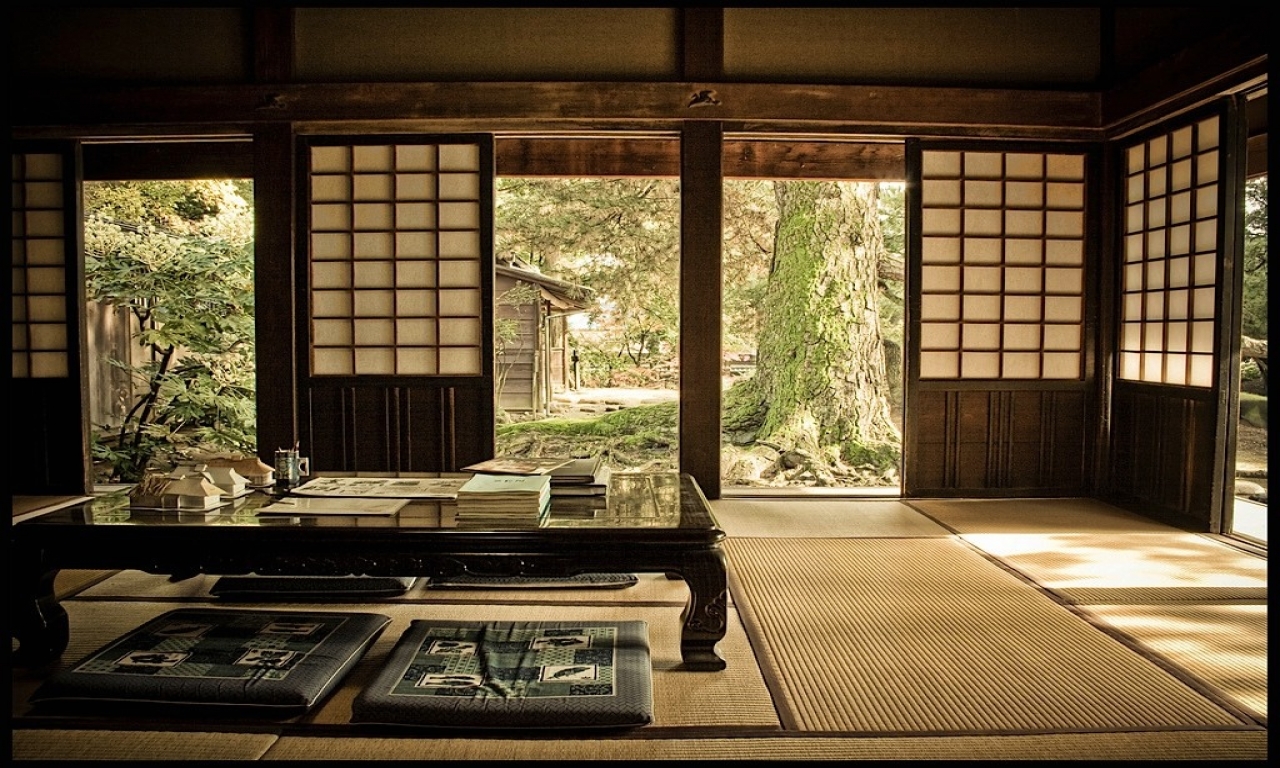 Most buildings in Japan, both anciently and today, must be able to withstand annual typhoons and occasional tsunamis and earthquakes. Also, the summers can be very hot, the winters very cold, and every year there is a season of heavy rains. The Japanese of antiquity and the Middle Ages found a simple solution for this: do not build with the intention of being durable. For this reason, houses, instead of resisting bad weather, were made to yield to its whims and, if the worst happened, they were designed to be easily rebuilt. This way of building also meant that very few old buildings had survived to the present day, although their style and architectural solutions certainly did remain.

Japan had a highly stratified class system, and architecture was one of many elements used by the authorities to maintain the status quo and reinforce the idea that everyone had their rightful place in life. There were, for example, specific sumptuary laws that prevented ordinary people from having houses of the style that the samurai preferred. 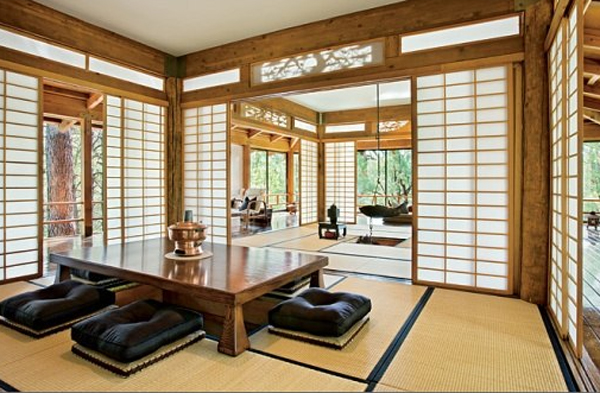 The samurai class greatly admired the Zen-influenced architecture of Buddhist temples, and imitated its minimalism and austerity in their own homes. These trends eventually reached constructions made for lower social classes. One of the elements in which the lower classes were on a par with the upper classes was in the scarcity of furniture, but usually this was due more to lack of resources than to aesthetic preference.

Before the modern era, Japanese domestic buildings (minka) could be divided into the following categories:

Although all of them had regional variations depending on the climate and the availability of local materials, some common characteristics can be identified. Houses in rural areas, for example, were single story, made of wood, and raised off the ground by columns. They had floors of hardened earth (doma) where they cooked, and they had a raised space with a wooden floor to sleep.

Town houses were smaller than those of the other categories because of the frequent lack of space in cities, but this problem was solved by building upwards, so many machiya had two stories. It was quite common for urban houses to be attached to each other, and for bathrooms and water intakes to be shared between neighbors. 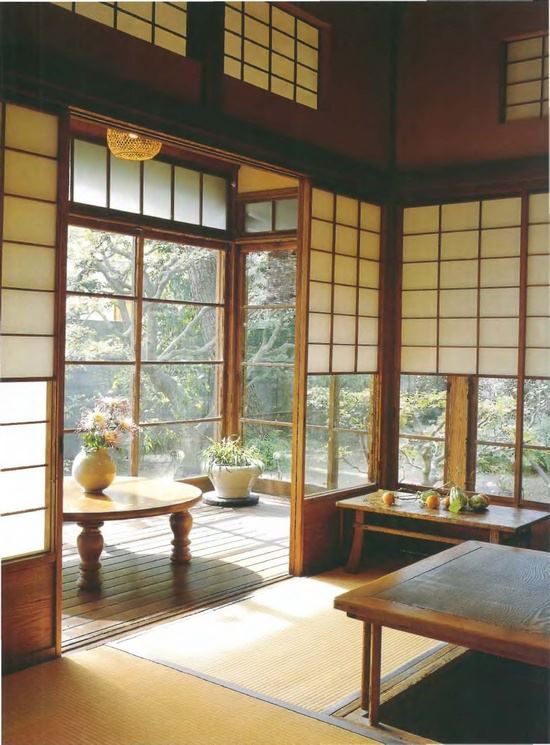 Many urban houses also functioned as the workplaces of their owners: they had a small workshop or a store. The windows were protected by sliding wooden panels (amado) that served as curtains. To resist the rain, the roofs were made with gables and eaves, and were covered with straw, tiles or bark. The main entrance had its own cover (genkan).

The most refined architectural style of houses became known as shinden-zukuri in medieval times, and an important element in it was the combination of house and garden. The gardens were designed to be viewed from various points of the house by moving sliding windows and walls.

They were typically landscaped, and might have trees, flowering shrubs, special grass sets, mossy areas, artificial hills, water features, and a rock garden. The garden did not necessarily have to be a large space, since all its elements could be miniaturized. Larger gardens often featured their own rustic tea house (sukiya), a space made especially for the Japanese Tea Ceremony. Initially, the shinden-zukuri style was only enjoyed by the samurai class.

The living room (zashiki) was first used in the houses of the samurai who, as members of the upper class, had to give audiences to their vassals and officials. For the same reason, a part of the living room floor could be slightly raised (jodan-no-ma). Subsequently, the idea spread among the houses of common people during the late Middle Ages. In the same room you could also sometimes find a built-in desk (tsukeshoin) facing the wall, another vestige of the samurai houses.

Paper-covered (fusuma) interior sliding doors were made by gluing paper (or sometimes even silk) over a delicate interlocking wooden frame. To play with the size of spaces, sliding doors were opened or closed, and windows were often designed in the same way. A crossbar or ramma could be placed on both elements, a carved wooden rectangle that provided more air and light to the place. 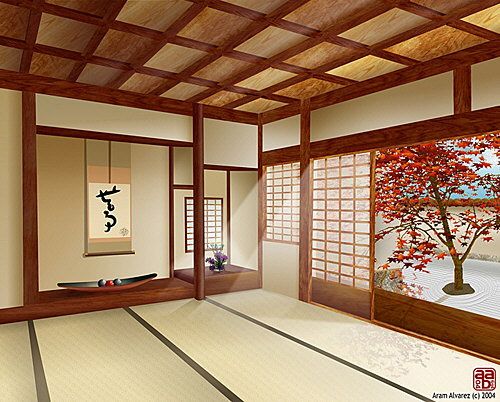 The interior space could be further divided by paper screens (shoji) that could be collapsible (byobu) or consist of a single panel (tsuitate). The paper used for screens was usually thinner and more translucent than that used for walls. Some more rustic houses might have bamboo or reed (sudare) shutters over the windows.

THE SCROLLS WERE OFTEN PLACED IN NICHES MADE IN THE WALL FOR THAT PURPOSE (TOKONOMA), AND MAY DISPLAY A PAINTING OR AN EXAMPLE OF FINE CALLIGRAPHY.

The wooden floor of the traditional Japanese house was covered by rectangular tatami mats made of straw with a top layer of woven grass. Tatami mats date from the Heian period (AD 794-1185), and both the thickness and pattern of the weave were indicators of status in medieval Japan.

Although its size was not exactly standardized across the country, the number of tatami mats that could be placed in a room became a common way of measuring the size of the floor. The size of a tatami in medieval times was about 85cm x 173cm. Charcoal braziers (hibachi) or a central hearth were used to provide heating, and for lighting, during the Middle Ages, wooden torches or oil lamps were used. 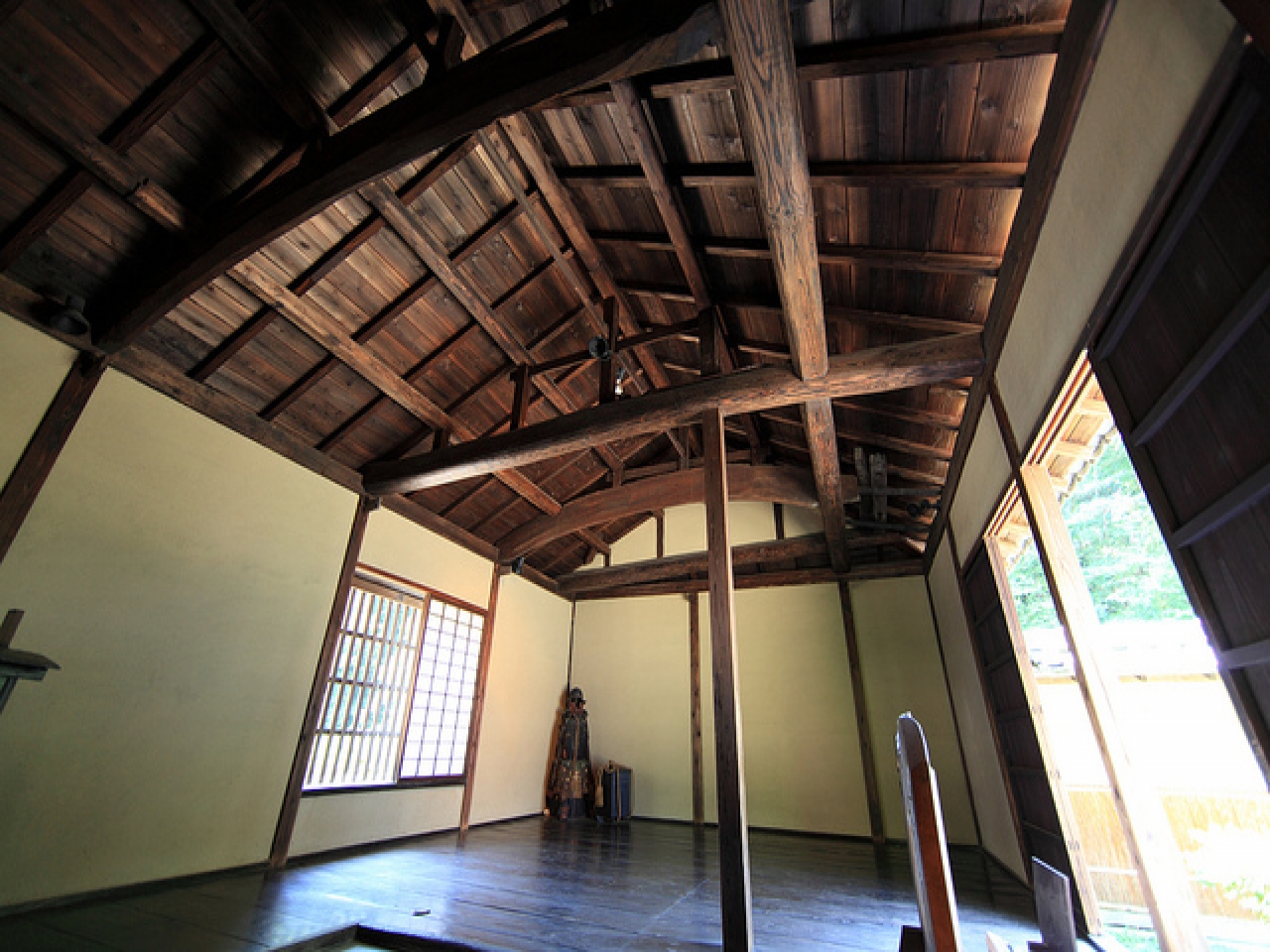 In medieval Japanese houses there was little furniture, but it could include floor cushions (zabuton), portable armrests, a low table (chabudai), small storage cabinets (kodana), hidden cupboards (shoji), and chests (tansu). These items were often made from exotic woods or bamboo, and their design could be further refined by using lacquer or gold plating. Valuable objects such as weapons or jewelry were kept in trunks, which were sometimes placed in the northeast corner of the house, where it was believed – according to ancient Ainu tradition (the original Japanese population) – that the guardian spirit of the home, Chiseikoro, lived.

Clothes were usually kept on racks or shelves, and beds consisted of a thick tatami mat, several stacked tatami mats, or a futon: a thin mattress filled with cotton, wool, or straw that could be easily folded and stored on a shelf or put on a bed. corner when not in use. For the colder months, a wool or cotton blanket, kakebuton, was used; and to sleep during the summer you could place a mosquito net that hung from the ceiling, an invention that has been used in Japan since ancient times.

Many people placed works of art in their houses, and these could be very varied. Hanging scrolls (kakemono or kakejiku) were made of silk or paper. They had a wooden post at the bottom that acted as a weight to keep it extended on the wall and helped to roll it up for storage. Such scrolls were often placed in wall niches made for the purpose (tokonoma), and could display a painting, an example of fine calligraphy, or a combination of the two. In the case of the paintings, these typically depicted landscapes, and were usually changed at the beginning of each of the four seasons so that their subject matter matched the weather in which they were viewed. 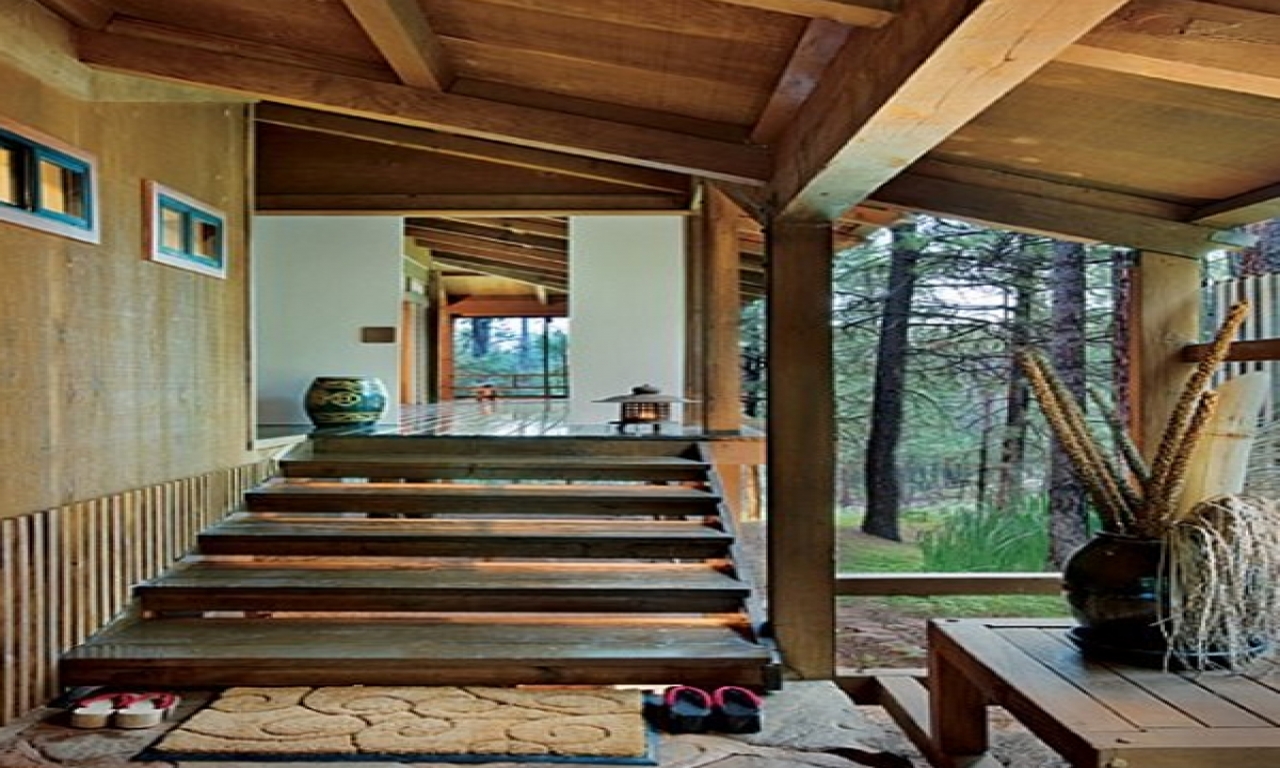 Another way to show off your artistic taste was to have paintings made on your sliding door paper, paper walls, or screens, but a cheaper way to decorate your home was to buy woodblock prints. These were especially popular in 17th century towns and cities and usually featured urban scenes (especially related to leisure activities), famous scenic spots, and actors. The prints were glued directly to the walls or panels. Purely decorative objects were little used in the houses, but perhaps a fine piece of porcelain or lacquer could be displayed. Some ornaments, such as a flower arrangement or an incense burner, were sometimes placed on a pair of stepped shelves (chigaidana).

Even if there were some valuable collectibles in a Japanese house, they were not guarded in any way, and a thief had only to slide a window, or even the front door, to enter. For this reason, those who could afford it often hired a caretaker if they were going to be away for any length of time. Another consequence of this lack of security was that any unknown person who approached a house was considered suspicious, so visitors had to shout “excuse me” when approaching the entrance, a tradition that still continues in modern Japan.

32 things you need to know about Contemporary living room furniture

We will be happy to hear your thoughts